I am delighted to announce that we will be making Awards once again at our AGM in 2021. We had a break in 2020 as a result of Council’s detailed review of all our SHNH Awards, when we considered their scope and the criteria used for them as part of our strategic review.

Our awards recognise excellence within the study of the history of natural history, a way of honouring achievements and recognising individual and group talents. We have now set dates when nominations can be received and the cut-off dates; details of all the awards, the nomination process and the criteria by which they are judged can be found here.

Nominations are open now for two Awards, the SHNH Founders’ Medal and the SHNH President’s Award.

Our longest-standing award, the SHNH Founders Medal, is awarded to persons who have made a substantial and sustained contribution to the study of the history or bibliography of natural history.

The SHNH President’s Award, being made for the first time in 2021, will recognise an individual’s or team’s contribution to promoting, facilitating and improving accessibility, inclusivity and diversity to the study of the history of natural history.

The SHNH Thackray Book Award, named in honour of John Thackray, a past President of the Society, is awarded for the best book published on the history or bibliography of natural history in the preceding two years.

The SHNH Stearn Essay Prize is named for William T. Stearn, a scholar whose work contributed much to the field and to the Society. The prize is awarded for the best original essay in the history of natural history written by a student or early career researcher.

Our awards, medals and prizes are highly valued, and the Society is aware of the wealth of talent and expertise in the membership and beyond that deserves recognition. Council asks that you take time to read the detail about all these awards, spread the information to your networks and most importantly, encourages you to make nominations for the Society to consider. 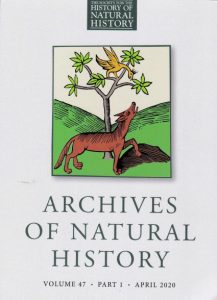 @SHNHSocNatHist
One week to go until the deadline for the 2022 SHNH Book Prize, awarded to the best book published on the history o… https://t.co/riSJBLVxE9

@SHNHSocNatHist
RT @Nat_SCA: New blog out today "The 'Social History of Natural History: People and Plants' Workshop One" - well worth a read! https://t.co…